Empowered by tax reform and regulatory certainty, manufacturers are investing in our communities and in our people. Our latest Manufacturers’ Outlook Survey shows nine consecutive quarters of record optimism, with an average of 91.8 percent of manufacturers positive about their own company’s outlook over that time frame, compared to an average of 68.6 percent across the two years of 2015 and 2016. Manufacturers’ top concern remains the inability to attract and retain a quality workforce, and concerns about our nation’s crumbling infrastructure continue to rise.

Optimistic about their company's outlook. 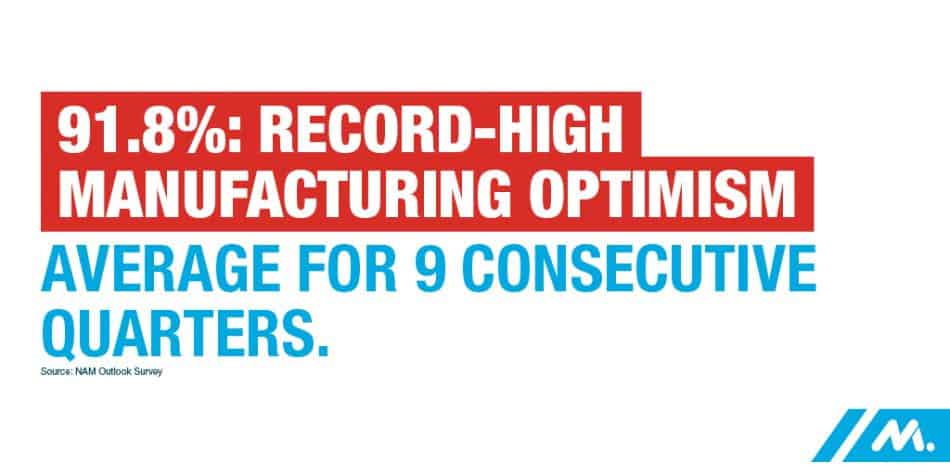 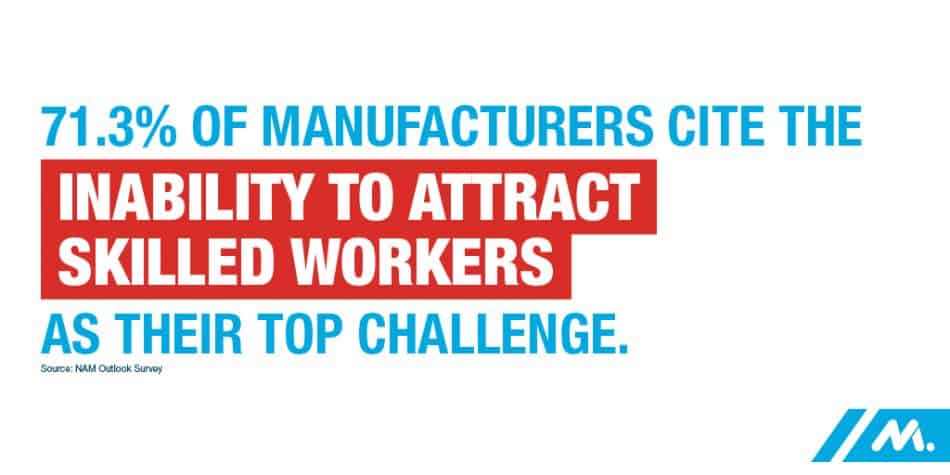 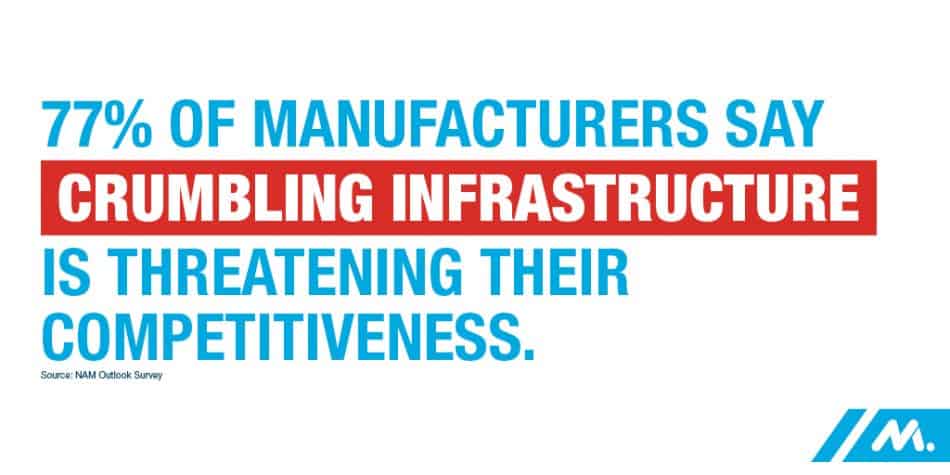 Manufacturing in the United States is on the rise, and manufacturers are confident about the future. Empowered by tax reform and regulatory certainty, manufacturers are investing in our communities and in our people. But to keep up this momentum, we have to get serious about infrastructure investment and attracting, recruiting and training our people for the high-tech, high-paying modern manufacturing jobs of today and tomorrow.

Note: The NAM has conducted this survey quarterly since 1997, with the NAM’s membership submitting this quarter’s responses from February 16 to March 1. In total, 466 manufacturers from all parts of the country, in a wide variety of manufacturing sectors and in varying size classifications responded this quarter. Aggregated survey responses appear in the full report. The next survey is scheduled for June 2019.

Manufacturers continued to report solid growth in activity this quarter, with the sector remaining one of the brightest spots in the economy and hitting nine consecutive quarters of record optimism. As revealed in this first quarter 2019 Manufacturers’ Outlook Survey from the National Association of Manufacturers, 89.5 percent of respondents said they felt either somewhat or very positive about their company’s outlook, up from 88.7 percent in the fourth quarter of 2018 (Figure 1). While this represents a slightly lower level of confidence overall as compared to the all-time high reading in the second quarter of 2018 (95.1 percent), it nonetheless continues a streak of highly elevated levels of optimism since the end of 2016. Remarkably, over the past nine quarters, the optimism index has averaged a very robust 91.8 percent. In contrast, it averaged 68.6 percent across 2015 and 2016.

Moreover, the NAM Manufacturing Outlook Index rose from 59.1 (revised) in the prior survey to 59.7 in the latest data (Figure 2). Index readings above 50 indicate the outlook exceeds the historical average of the survey (75.0 percent positive), and values above 60 suggest that the outlook is at least one standard deviation greater than that average. The index has exceeded 50 for 10 straight quarters.

Clearly, manufacturers remain very optimistic about business conditions overall. This is driven in no small part by the boost in confidence experienced since the end of 2016 with the expectation (and later, impact) of pro-growth federal policies like tax reform and regulatory certainty. Tax reform in particular helped many manufacturers invest more in hiring, compensation and their communities. By the same token, as this quarter’s survey reveals, going backward on tax reform could have just the opposite effect. When asked about the impact of Congress potentially rolling back tax reform’s pro-growth provisions, two-thirds of respondents said they would consider reducing capital investments in the United States, and 54.4 percent and 61.9 percent said it might force them to have to scale back employment and wages and bonuses, respectively.

Other headwinds to continued manufacturing optimism include the state of our nation’s infrastructure. More than 77 percent of respondents in this quarter’s survey felt the nation’s infrastructure is not sufficient to meet their competitive needs moving forward, with 14.7 percent uncertain and just 8.0 percent satisfied. Moreover, 56.1 percent said passage of a major infrastructure bill would impact their company’s business plans and outlook positively. Similarly, roughly two-thirds of manufacturing respondents said the current immigration system does not meet the needs of employers and businesses in the United States.

Other major concerns in the latest survey included rising health care and insurance costs (56.5 percent), increased raw material costs (55.8 percent), trade uncertainties (52.6 percent) and transportation and logistics costs (34.3 percent). Manufacturers sell more to Canada and Mexico, our country’s largest two trading partners, than the United States’ next 10 trading partners combined. Therefore, it should not be a surprise that more than three-quarters of respondents said passage of the United States–Mexico– Canada Agreement was important for their company. In addition, 48.2 percent said trade uncertainty had impacted their company’s business plans and outlook negatively.

Finally, at 71.3 percent, the inability to attract and retain workers remained respondents’ top concern for the sixth consecutive survey (Figure 3). The manufacturing industry’s skills gap challenge is a longstanding problem, but one that has been made even worse by recent economic successes, including an unemployment rate near 50-year lows and a labor market with more job openings than people looking for work.

Below are some highlights of the current survey in terms of predicted activity growth over the next year (Figure 4):

More Key Numbers from the Survey