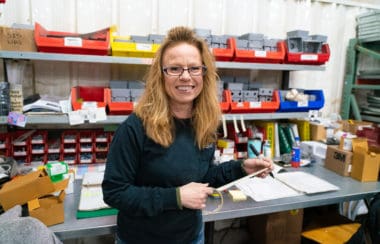 For generations, manufacturers in the United States have faced and transcended great challenges, providing the nation with a better future. Now, America’s leaders have a once in a generation opportunity to strengthen the nation’s infrastructure. Manufacturers not only depend on reliable infrastructure to support supply chains and operations, but in many cases also help to build it.

Americans recognize that our nation has an urgent need to modernize our infrastructure. With so much at stake, there’s no time to delay.

We need your help to make sure this infrastructure legislation will address the projects important to manufacturers, keep taxes low so wages and employment stay high and improve the lives of manufacturing workers by keeping American companies competitive.

This toolkit is intended to help manufacturers, their employees and all manufacturing allies take action to let their elected leaders in Washington know why they support historic investments in U.S. infrastructure.

President Biden and members of Congress in both parties need to hear from you about manufacturers’ priorities in pending infrastructure legislation this year. These tools will help you:

With your help, manufacturers can unite Republicans and Democrats to reinvest in our economy and strengthen American competitiveness!

Manufacturers have a detailed blueprint of forward-looking solutions called “Building to Win,” which lays out our industry’s infrastructure priorities.

As Building to Win explains, investment in American infrastructure will:

Manufacturers have also called on Congress to take several necessary actions, including:

How do we fund this?

“Building to Win” provides a list of optional funding sources for Congress to consider, including user fees, programs that will lead to private investment and support for bonds to raise infrastructure dollars. All these options could be implemented without increasing tax rates or rolling back key tax provisions of the 2017 Tax Cuts and Jobs Act that have been beneficial for manufacturers in America.

The case against tax hikes

“Building to Win” provides policymakers with innovative ideas that will allow for greater private investment in the infrastructure network, helping businesses plan for the future by ensuring vital infrastructure projects are funded for the long-term. We can achieve historic levels of infrastructure investment without the detrimental economic impacts that would result from some of the proposed tax rate changes.

Next to friends and family, company leaders are the most trusted sources of information about issues shaping our society.

Your employees and your colleagues need to hear from you about why making historic investments in our infrastructure is important to your company. Here are some resources to customize as you see fit.

Manufacturers are committed to ensuring America’s infrastructure is the best in the world.

Too many of us experience the effects of chronic underinvestment in our infrastructure on a daily basis, from crumbling roads and bridges to congested airports, deteriorating utility pipelines and strained electric grids.

I’m writing you to let you know why [COMPANY NAME] is calling on leaders in Washington to seize this moment and make historic investments in America’s infrastructure systems.

A strong and resilient national infrastructure is good for manufacturers, including [COMPANY NAME]. A more durable and efficient infrastructure network will help manufacturers better serve our customers and communities and create more jobs throughout our economy. It will bolster the security of our nation and strengthen the manufacturing supply chain—a consideration made even more important during the pandemic.

Some in Washington have called for increasing taxes on businesses to fund these projects. Policymakers can and should use other resources to pay for these critical investments, such as tapping into private capital, bonds and debt financing—instead of tax increases that would sacrifice jobs.

If you agree, I’m asking you to take 5 minutes to use this tool to call or email your member of Congress to let them know why you support investing in our infrastructure.

This is an important issue and a priority for [COMPANY NAME] and I hope you’ll consider joining me in taking action. [COMPANY NAME] is part of the National Association of Manufacturers, which is leading the fight on behalf of our industry for these historic investments. I invite you to learn more about their proposals here.

If you have any questions about [COMPANY NAME]’s approach to this issue, or if you want to learn more, please don’t hesitate to reach out to [TRUSTED LEADER / EMPLOYEE LIAISON.] We want to hear from you.

Thank you for your consideration in helping [COMPANY] continue to grow and thrive in our modern economy.

NAME President/CEO (or other trusted leader)

This quick guide is intended to help manufacturers, their employees and all manufacturing allies have productive conversations with peers, friends, and family members about infrastructure. All data referenced below can be found in “Building to Win” or in other related materials.

More than 70% of manufacturers do not believe our nation’s infrastructure is positioned to respond to the competitive needs of a growing economy and ever-expanding cities and communities.

The 2017 tax reforms helped manufacturers achieve record levels of job creation, wage growth, investment and productivity. Increasing tax rates on small and larger businesses and phasing out deductions would have the negative consequence of costing 1 million jobs within two years, according to a recent study published by the National Association of Manufacturers.

Infrastructure investment can be funded through user fees, including reform to federal fuel taxes or registration fees, or through public-private partnerships, including qualified public infrastructure bonds and a national infrastructure bank. Investment by state and local governments will also help alleviate funding gaps.

According to the latest information from the Organization for Economic Cooperation and Development, China’s infrastructure investment is nearly five times that of spending in the United States and nearly double that of the next 20 countries measured by the OECD combined.

Modern infrastructure supports greater productivity and increases a manufacturer’s gains in efficiency. For example, if a community’s main bridge closes, manufacturers in the area could stand to lose hundreds of thousands—even millions—of dollars if workers miss just one production shift.

Job Loss: Without immediate action on the infrastructure crisis, the U.S. will lose more than 2.5 million jobs by 2025 and more than 5.8 million by 2040.

Job Creation: It’s projected that $1 trillion in infrastructure investment could create 11 million jobs. Approximately 10% of infrastructure jobs would be in manufacturing, with specific needs for skilled workers in fields such as information technology and data science.

Improved infrastructure will provide manufacturing employees with better access to job opportunities and options for housing, telemedicine, shopping and recreation.

After decades of underinvestment, the gap between current spending and what is needed to revitalize U.S. transportation infrastructure alone has reached $1.09 trillion.

Water: Communities across the country rely on clean drinking water and safe wastewater management systems. But with over 240,000 water main leaks per year, causing illness and costly damage, our water infrastructure is in desperate need of investment.

Energy: We depend greatly on the electric power grid and vast amounts of oil and natural gas. And this demand increases each day. Investing in affordable electric power and pipelines can save families and businesses money and create thousands of new jobs.

Digital: Americans are online more than ever, and manufacturing shopfloors are more digitally connected than ever. Our need for modern wireless technology and fast connectivity is at an all-time high. Investing in broadband infrastructure will improve our quality of life and keep our businesses competitive.

All levels of government have a responsibility and role in the modernization and funding of U.S. infrastructure. While the federal government provides substantial funding for infrastructure, the actual investment decisions and execution rest with our state and local leaders.

Through persistent outreach to our officials, we can drive attention to this issue and secure the necessary funding to keep our country running and competitive on the world stage. Each of us can advocate infrastructure investment in our own community by simply calling or emailing our federal and local officials.

Below are email and text message templates to adapt for your outbound communications. If you manage a grassroots software system that connects your grassroots advocates to legislators, we recommend that you link to that action form in your outreach.

Don’t have an action form to direct your grassroots audience to? Across the draft communications below, please feel free to use and point to the NAM’s official infrastructure action form: https://act.nam.org/infrastructure. Please note that any individual who engages with this link will become a member of the NAM’s grassroots campaign.