Washington, D.C. – Emerson Chairman and CEO and National Association of Manufacturers (NAM) Board Chair David Farr testified at today’s House Ways and Means Committee hearing on how tax reform is growing our economy and creating jobs. At the hearing, Farr announced the results of a new survey of manufacturing CEOs, which shows that manufacturers are keeping their promise after passage of the historic tax reform legislation by boosting wages, hiring and investment. 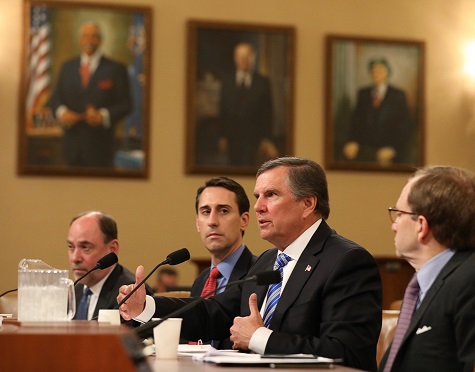 Almost exactly one year ago, I appeared before Congress to make the case for tax reform that would make America fiercely competitive. Congress and the president kept their promise and delivered. Now, it’s our time to keep our promises and deliver—and we are, said Farr. Manufacturing in America is now rising to new heights, thanks to tax reform, and as a result, manufacturers of all sizes are already investing more, growing more, hiring more and paying more. They are already improving lives and livelihoods. And, as the survey results I’m releasing today show, we manufacturers are just getting started.

Manufacturers were a leading advocate for the historic tax cut legislation signed into law by President Donald Trump, saying they would hire more, invest more and compensate their workers more if the legislation was passed. In the spirit of that commitment, the NAM recently launched the “Keeping Our Promise” campaign—a new series of original stories from manufacturers about how they are utilizing the new tax law to benefit their businesses and workers.