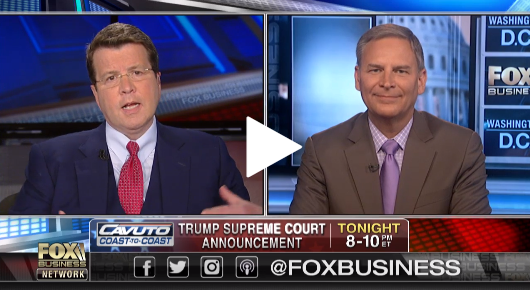 “Let’s hope that this is a negotiating tactic and that the administration is positioning us in a way that will enable us to create some good deals. I mean, for us, when we look at China and we have been talking about China—you and I have talked about China—the fact that China cheats, the fact that China steals intellectual property, counterfeits, dumps, subsidizes their products—none of that is good, but a trade war ultimately will be bad for everyone, especially consumers in the United States. So, we want to get that behind us; we want to get a deal with China done so that we have a level playing field.”

“Over the course of the last two years, we’ve added almost a quarter of a million jobs after having lost thousands of jobs in 2016. And in fact, if you look at manufacturers’ outlook right now—our last survey that we released—about 95 percent of manufacturers, 95 percent, have a positive outlook on the economy and their future. Eighty-eight percent say that they are going to hire in the next few months, and 72 percent are going to be raising wages and benefits. All of that is really great news; now lay the tariffs on top of that, the trade war on top of that, that’s not a good sign for manufacturers. We hope that this is resolved quickly because we want to get back to those positive signs.”

Timmons responded to the latest round of China tariffs Friday in interviews on CNBC and Fox Business. Read Timmons’ full statement here.