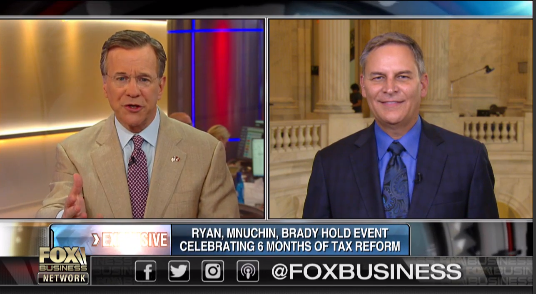 We’ve been working for 30 years to enact comprehensive tax reform and regulatory relief. We got that done and now seeing the results from it. So, as you said, a 20-year high in our quarterly survey … [A]nd in exchange, we promised that we would hire new workers. We would invest in plants and equipment here in the United States and raise wages and benefits. We’re seeing the results of that. In fact, 86 percent of our members say that they will invest in new plants and equipment, 77 percent say they are hiring new employees and 72 percent say they’re raising wages and benefits. We have to keep our word to the American people or else this exercise was for not.

I get that there are skeptics out there, and I think it’s healthy in a democracy to question the policies that are enacted. But I can tell you this: manufacturers are going to deliver. In the last six months, we created 115,000 new jobs. That is double what it was over the course of the last year. All I can say is watch us work.

Yesterday, the NAM released the results of the Manufacturers’ Outlook Survey for the second quarter of 2018, which showed 95.1 percent of manufacturers have a positive outlook for their companies—an all-time record in the survey’s 20-year history—following enactment of the Tax Cuts and Jobs Act.